Well, as part of cataloguing up all my stuff, I thought I’d better start listing my projects too that need assembly or painting to finish off.  Ouch.

I feel I may have to actually finish or give up on some of these!

Well, with the announcement of a re-release of Bloodbowl from Games Workshop in 2017, there’s a lot of excitement about the game!  It’s worth noting, though, that there has been lots of activity in the Bloodbowl area for years, even without GW support, so here’s a look at some of the cracking teams and options that are out there.  Rather than breaking it down my manufacturer, I thought I’d break it down by race!  First up, Dark Elves!

NB – As I come across more bits and pieces, I’ll hopefully keep this up to date with new options and models.

This is probably my favourite looking Dark Elf team at the moment.  Its a vicious looking greek style armour, with all the positions you’d want for a Dark Elf team, and the slightly unusual theme really makes it distinctive (with a solid nod to the original 2nd edition GW team).

This team is quite neat with some very dynamic poses.  To me, though, it feels a little bland with the slightly generic elf but spiky look.

The sculpts aren’t up to the standard of some of the more modern style teams here, but there is lots of character in there with a decent range of positions and poses. 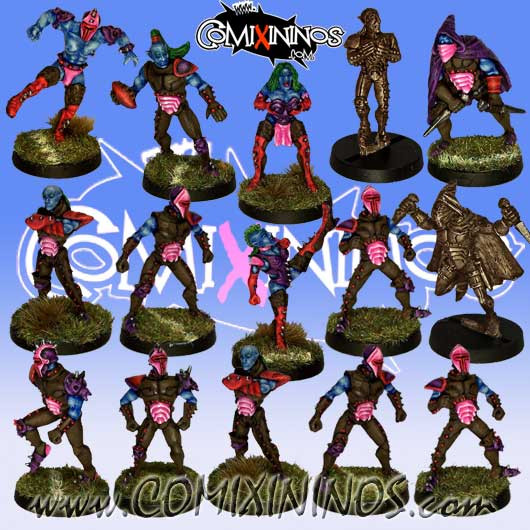 This team has been on the market since before GW stopped selling BB!  Its a cracking set of sculpts, if a trifle cheesecake!  Still nice to be able to field a female team on the pitch though!  I must confess, I have a full set of these 🙂  And if you do a lot of the skin areas as lycra, they actually look pretty fun.

One useful note – there are a wide range of extra models for the team beyond the core – both extra poses for the various positions, but also for the various support roles, such as cheerleaders, mages, coaches, security and so on.

I’m not terribly enamoured by these, as there isn’t enough different sculpts, and the clothing choices are … odd.  Mind you, paint the exposed skin area as spandex and it’d actually look pretty good. 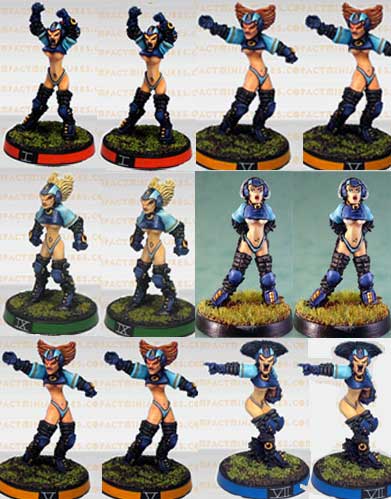